Out and About in Philly: Upper Burying Ground of Germantown and The Concord School House

Germantown: The Upper Burying Ground and the Concord School House 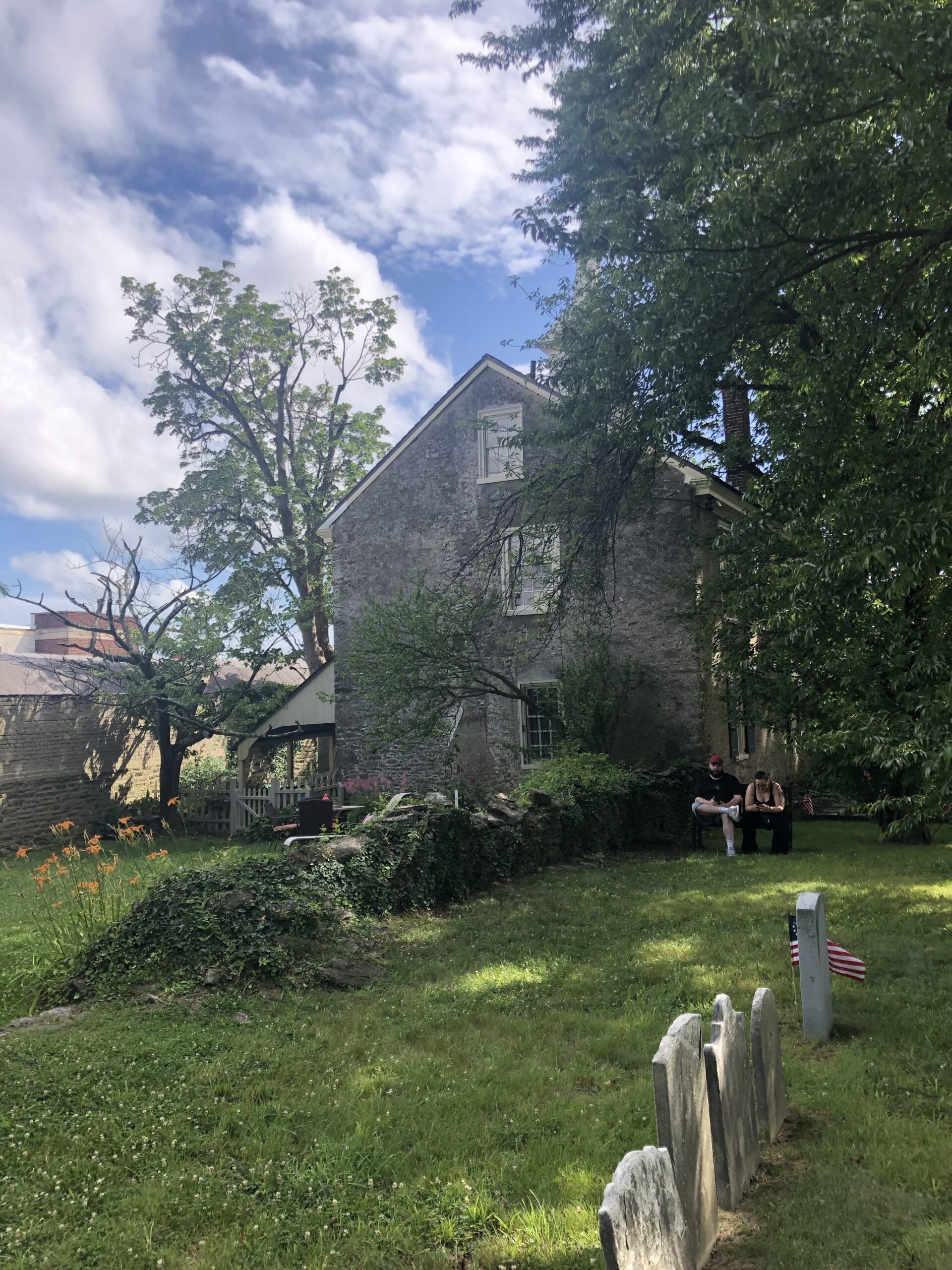 Established in 1693, the Upper Burying Ground is one of the two oldest cemeteries in Germantown and one of the oldest in the Philadelphia region. The Concord School House, built in 1775 and expanded in 1818, is an intact nineteenth-century schoolroom which occupies a corner of the Burying Ground.

This site is one of 18 preserved and overseen by Historic Germantown. Visit their site at freedomsbackyard.com for information about all the sites and a calendar of programs and events. Historic Germantown describes itself as: a partnership of 18 extraordinary historic houses, destinations, and museums in Northwest Philadelphia that have joined together to protect, preserve, and share some of Philadelphia’s prized historical assets.

Days and Times: This site is open on the second Saturday of each month, from May through October, from noon-4pm. Guided and self-guided tours are available, and no appointment is necessary. Special events are held here and group tours can be scheduled.  Call: 215.844.1683

Accessibility: This site would be difficult for those using wheelchairs. 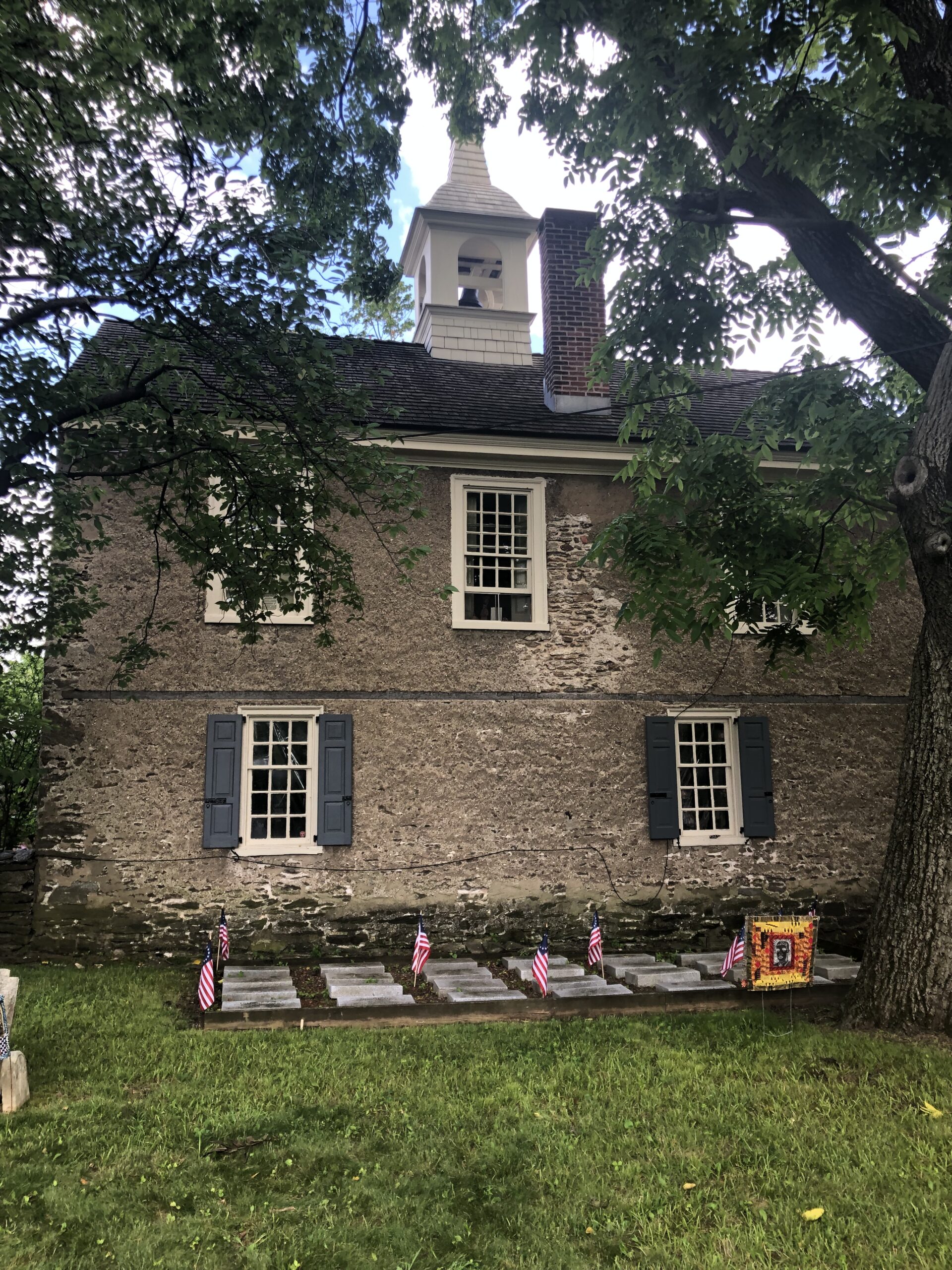 The Upper Burying ground  is notable as the last resting place of 58 American soldiers from the Battle of Germantown during the American revolution.  There are also a dozen soldiers from the War of 1812 buried here. These are some of the graves with the Concord School House in the background. It is estimated that over 1300 persons may be buried in the Upper Burying Ground. However, only slightly over 300 tombstone inscriptions are recorded. Some may have disappeared, but most burials were of poor people or children whose families could not afford stones. Some Blacks were buried in the Upper Burying Ground in the early and mid-1700s: Catholics, Jews, and Protestants were buried here. Native American burials are also recorded. 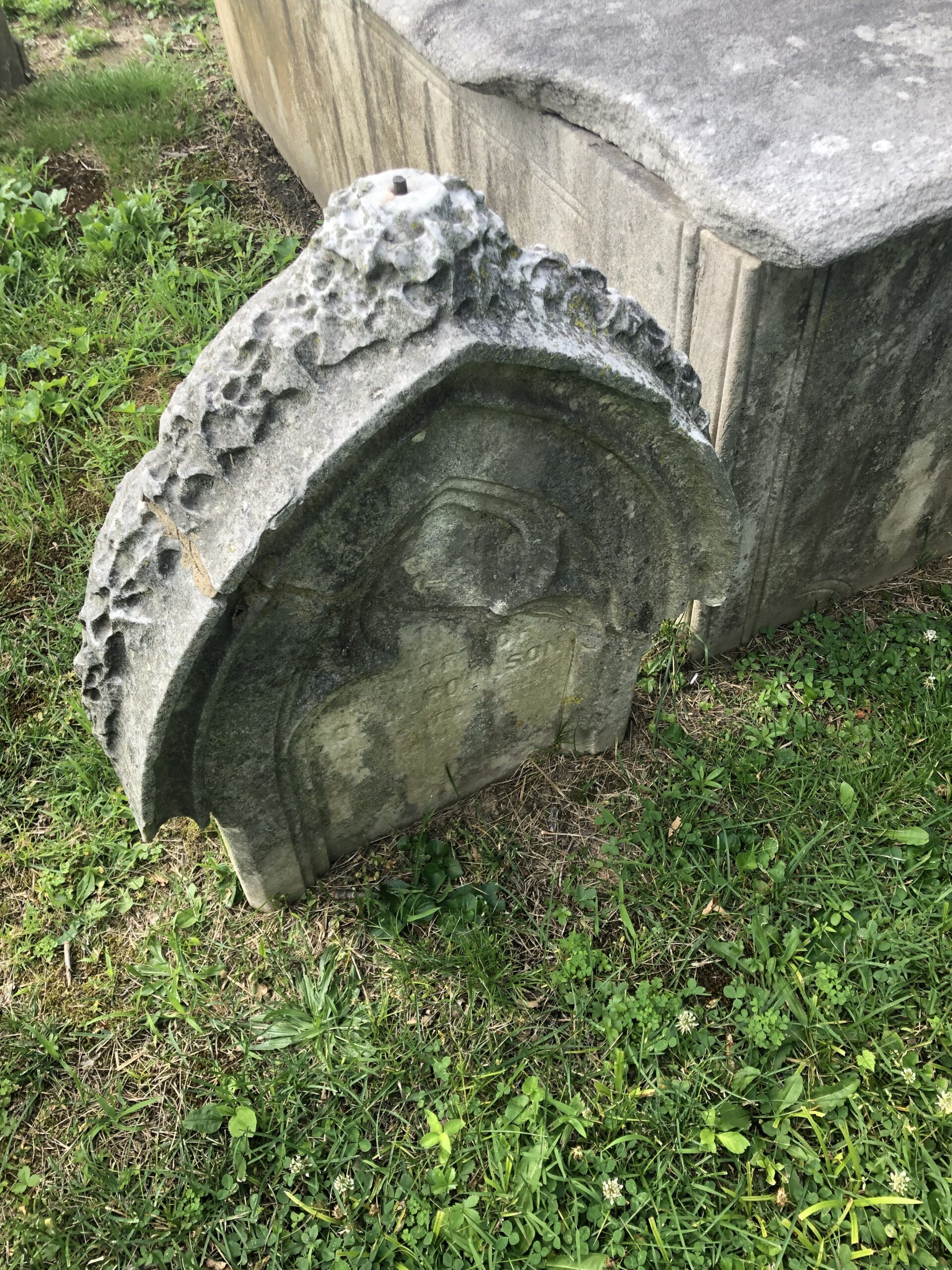 There are many beautiful old graves with inscriptions that are hard to read.  Inside the school house there are copies of the burial ground records.

The Concord School sits on a corner of the Upper Burying Ground of Germantown. The construction of the stone schoolhouse, originally one story, took place under the supervision of a group of residents in 1775. The second story and the bell tower were added to the building around 1818. Note that the weathervane is a quill! 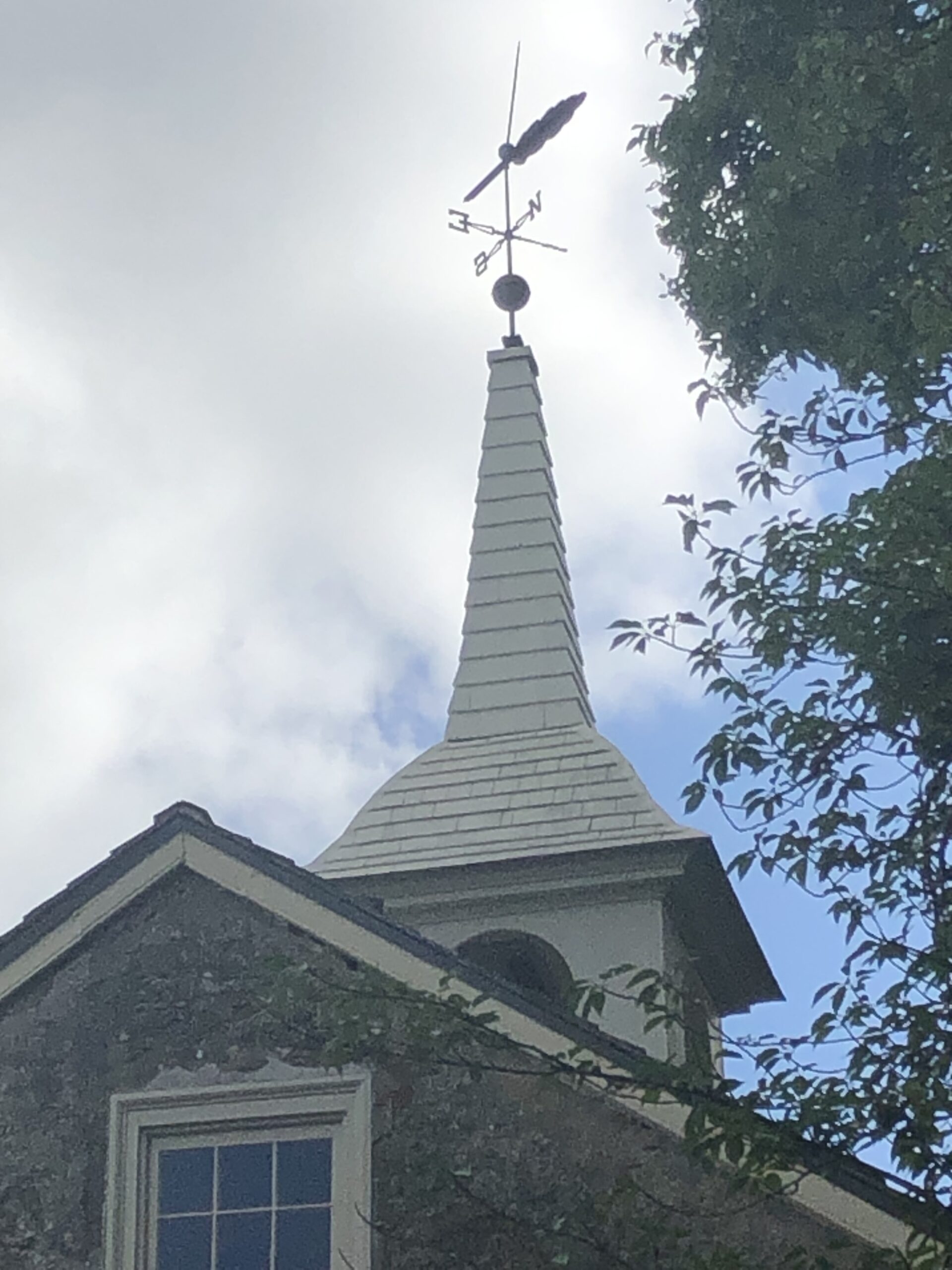 The first minute book of the school, in use from the school’s early decades through the early twentieth century, is held by The Historical Society of Pennsylvania. According to these minutes, inhabitants of upper Germantown (122 subscribers) collected funds to build the schoolhouse because of “the Distance and particular Inconveniance [sic] through the Winter Seasons of sending their Children to the Lower School and Seeing the number of Children Continually Increasing . . . .” Various theories have been proposed to explain the name Concord: it may commemorate the ship on which the first Germantown settlers arrived, or the first skirmish of the American Revolution, or the fact that the cemetery in which the school sits included residents of all religious denominations, lying together “in sweet concord.” 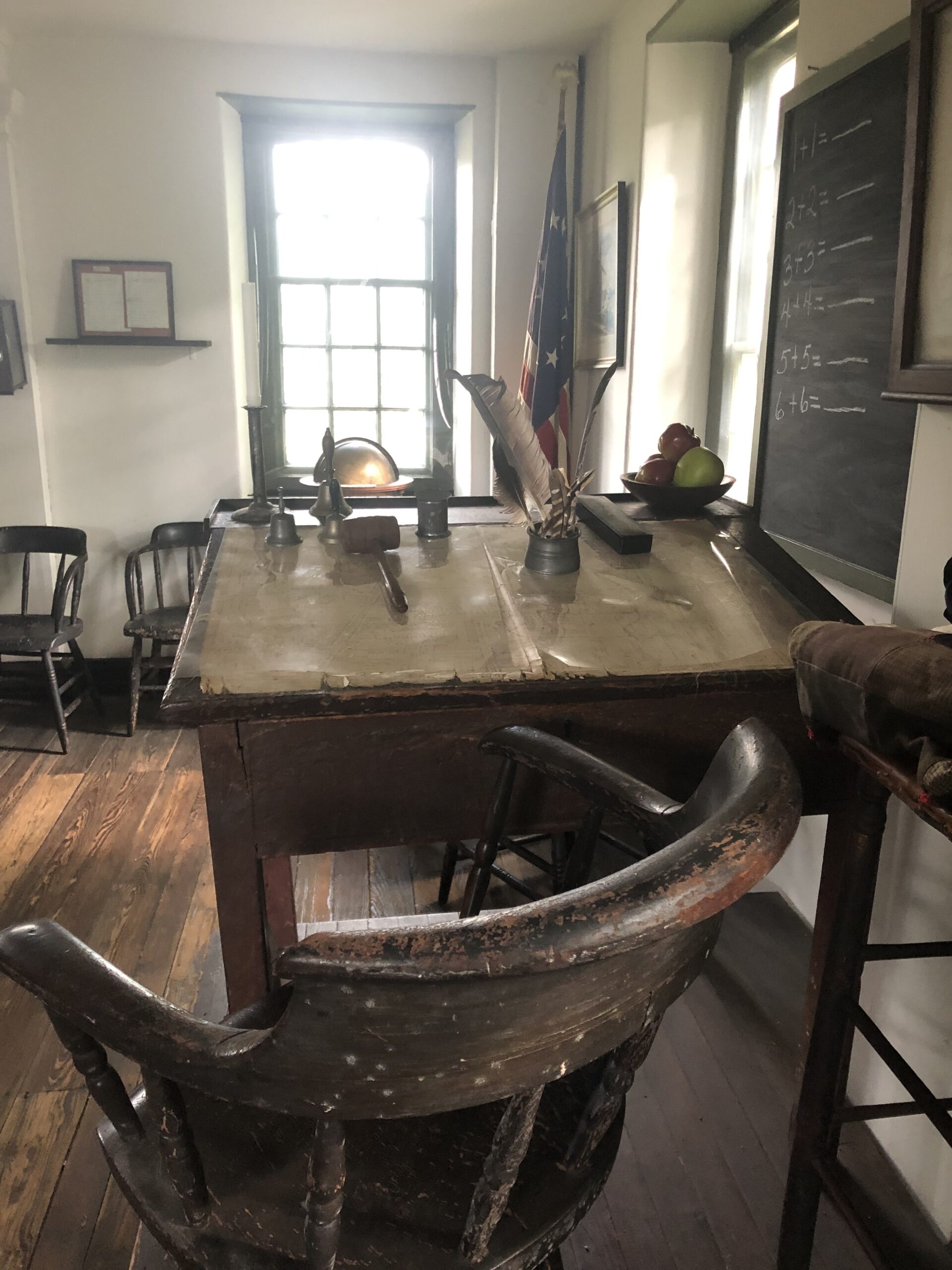 This is a teacher’s desk original to the period.  Beyond it is an old globe.

The school served as one of Germantown’s public schools for a short period in the 1840s and thereafter as a private school and meeting place for various local societies. In 1855, the Charter Oak Association rented the upper room for use as a library, the Charter Oak Library. In 1903, the building became for a brief period the home of the Germantown Site and Relic Society, later the Germantown Historical Society.

A glass case displays objects original to the site.

Jamie didn’t go with me on this visit.  She has, however, been to this site before, on a school visit.  She remembered it as a very peaceful place. She was disappointed that some of the gravestones were unreadable due to age and deterioration.  However, as I mentioned, there are copies of the burial records in the school house.