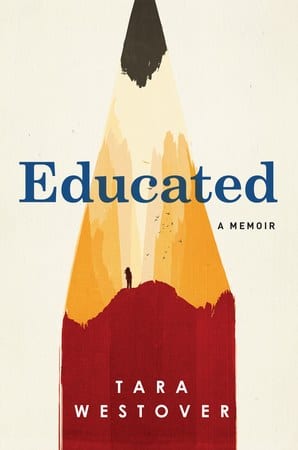 I feel like I’ve been reading a lot of books lately—both fiction and non-fiction—that feature an unhinged father and a creative mother who dangerously accommodates the father, at least for a time. Think The Glass Castle, a memoir, and Where the Crawdads Sing, a novel.  And then there is Educated, by Tara Westover, a compelling and beautifully written book.

Educated is, of course, a huge bestseller, and most people know the story:  Tara, the youngest child of seven, grows up on a mountain in Idaho with a father who was raised Mormon but has morphed into a radical fundamentalist with a hatred of the government and institutions, especially schools and medical care. He thinks he’s a prophet.  And while the mother initially attempts to deflect and accommodate him, eventually she crosses over to the dark side.

Although some of the older siblings went to school for a time, the younger ones, including Tara, are home schooled, which essentially means they are taught to read religious texts and work in their father’s junk business.  Inspired by one of her five brothers who teaches himself enough to get into Brigham Young University, Tara begins to prepare to take the ACT exam. While her father isn’t happy about her brother’s defection from the family, he and one of the older brothers, Shawn, are rabidly angry about Tara’s intentions.

Their response is complex because of the way they equate education with ungodliness, and in particular, formulate a parallel between an educated woman and immorality.  In her father’s words, she was “whoring after man’s knowledge instead of God’s.”  Their relentless emotional and Shawn’s physical abuse eventually convince Tara that she is unworthy of an education, and when she finds she still wants one, that her desires are in defiance of God.

The primary struggle in the book is not about Tara getting an education—she is brilliant and stubborn enough to persevere.  The primary challenge is within Tara, where the misogynistic, paranoid delusions of her father haunt her.  She wants what she has been taught is wrong, that her pursuit marks her as a “bad woman.”  In time she recognizes that her choice is binary; she can’t pursue her academic ambitions and remain part of her family.   Her choice to “see and experience more truths than those given to me by my father” eventually causes a permanent rupture with her family, and for a time compromises her sanity.

I wish that this were a story of long ago, a story about a time that we only know from stories. While the tale of this family is extreme, destructive and hateful religious fundamentalism is alive and well and misogyny is everywhere we look.