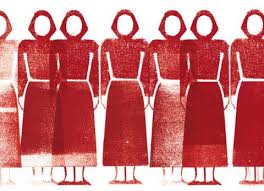 When I heard about the Hulu series based on The Handmaid’s Tale, what came to mind for me was the earlier movie, not the book.  I decided to reread it, and I’m so glad that I did. And then I immediately reread it again. If you have not yet read the book but intend to, stop here for there are spoilers ahead.

I had completely forgotten the complexity and power of Atwood’s writing in this novel.  The prose is associative, yet anyone who writes knows the effort she must have made on structuring so that what seems at times to be almost stream of consciousness is actually finely wrought. Changes in time and tense, along with flashbacks, are all handled masterfully without drawing attention to themselves. There are a fair number of allusions, which are included perfectly—for those who don’t recognize one, no harm done, but when recognized they add meaning and depth to the context. They also sometimes add humor—for example, the masters of Gilead indoctrinate with the maxim “From each according to his ability, to each according to his needs,” claiming that it is from the Bible.  And indeed there is some partial but similar language in Acts and Matthew, but the line as quoted is of course from Marx. How apt and ironic that a theocratic dictatorship would appropriate a line from Marx and attribute it to the Bible!

Many readers have called The Handmaid’s Tale prescient, and of course it was, although some things that seemed obvious in 1986, when the book was published, have turned out differently.  Is it prescient now?

The dystopian society of the book is called Gilead, and the most important of its authoritarian strategies is controlling sexuality in general and women in particular. Environmental disaster in the form of nuclear power plant explosions and pollution has occurred, and because of this and willful non-procreation made possible by birth control, abortion, and sexuality preferences, there is a birthrate crisis in the form of mass sterility and a low survival rate of conceived children.  The environmental disaster that we most feared then was nuclear toxicity—the book was written only a couple years after the Three Mile Island accident. But Chernobyl happened the same year the book was published, and the world began to turn away from nuclear energy.  Nevertheless we have the world-changing consequence of pollution—global climate change.

To mitigate the low birth rate, men assume control and disingenuously base their authoritarianism on a perverse interpretation of the Bible.  How frequently in the past three decades have we witnessed attempted control of women by men who advocate based on the Bible! In Gilead fertile women who are single, widowed, divorced, or in a marriage where either party was previously married (making the marriage adulterous) are forced to procreate with the powerful husbands—Commanders– of infertile wives. These women assigned to breeding are the Handmaids.  Previously born children are taken away from them. They assume the name of the Commander they are assigned to, in this case Offred (of Fred.)  And how do the Commanders control these women, not just the Wives and Handmaids but servants and the wives of regular workers who are called Econowives?  They control through violence and terror, and an almost complete ban on women working, reading, and writing. The most ironic figure in the book is Serena Joy, the Wife to whom Offred is “handed.”  In the time before Gilead she was a vocal advocate against abortion, for women staying home, for the traditional family.  She wrote a book about it. And now here she is, not permitted a public role, not allowed to read, passing her time in frustration by gardening and knitting.

In many ways the powerful voice of women of the “other time” has been co-opted. For example, women demonstrated against sexual violence and objectification, especially in the form of pornography.  This was turned on its head; the masters of Gilead claim they are protecting women from random sexual assaults caused by rampant pornography. Women advocated for better maternity leave, decent child care, and better working conditions for working parents. Gilead has removed this problem—no women work outside a home, so no need for these things. One hears whispers of “be careful what you wish for…”

Atwood imagines control without the most powerful electronic weapons of the digital age.  There are continual searchlights, spies and double spies, physical checkpoints and men with guns.  How much more effective and frightening it would be with modern technology!  Yet even without the digital capacity of the current time, when women’s money is taken away, Atwood imagines it is done through the ubiquitous electronic banking system that in one swoop assigns all financial accounts of females to the control of the closest male relative.

Control of men is necessary too of course.  Besides terror, Gilead has fake news!  One place where the book departs from what has happened in the last 30 years involves guns. No civilians are permitted guns. There are defiant groups still fighting against Gilead and they have kept their guns.  There are those in our pro-gun culture who would point to Gilead and say that is why they need to keep their guns. Surely there is a middle ground where we don’t have to sacrifice school children to maintain gun rights and yet we can protect our country from authoritarian revolution.  Ironically, a large number of our pro-gun citizens would have some sympathy with the rules of Gilead—everyone has to be Christian, abortion is banned, and anything but heterosexuality is termed Gender Treachery and punishable by death.

So here’s to you, Margaret Atwood, 33 years out from the writing. Thanks for a magnificently written book that continues to be provocative.